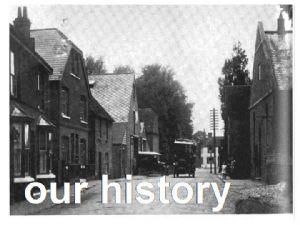 Our history begins with mission and church planting! The above is an extract from the first church minutes c.1832 and recalls how the Baptists of Dymchurch felt called by God to spread the gospel across Romney Marsh! The church was founded as a Baptist Church and continued the long line of non-conformists who had dissented and suffered for their faith. Locally Joan of Eyethorn was burnt at the stake in 1550 for distributing Tyndale's New Testaments and Baptists in the area were not allowed to be buried in consecrated ground.

In 1832 a local farmer donated land on which to build the new Baptist Chapel in North Street and by 1886 the congregation had grown enough to warrant an extension.

North Street c.1920. The Baptist Chapel Building is on the right.
The building on the left, outside which the bus is standing, is the old garage.

The old garage with a car outside. The garage has since been renovated and The Centre now stands on the site. The original roof trusses remain a feature in some of the
upstairs rooms!

Over the twentieth century the church ebbed and flowed in strength and numbers and by 1962 there were only 27 worshippers. We need to be grateful to God for the many faithful men and women who at times pioneered and at times persevered to keep things going.

Slowly more people came to faith and when Phil and Lorna Rowe arrived in 1985 the core was a group of people with a biblical desire to serve the Lord and genuinely to love one another.

By the summer of 1986, a clear vision was given in terms of structural and strategic advance. One of the changes was a name change from New Romney Baptist Church to the more encompassing Romney Marsh Christian Fellowship.

As the church grew it became clear The Old Chapel would no longer suffice and during this time we met in various local school halls. In January 2000 the building opposite the chapel (originally the old garage, later small industrial units) was purchased and renamed 'The Centre'. Since then rooms have been modernised and refurbished with a new worship centre, offices and modern facilities installed. The work is ongoing! 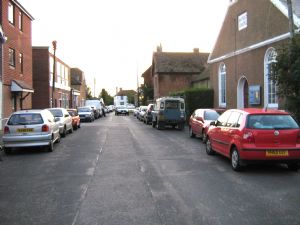 North Street today with the Old Chapel building on the right and The Centre diagonally opposite. 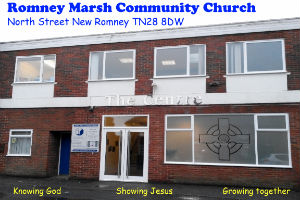 Around the year 2000 God began to join us with Salt and Light Ministries. With apostolic input we are seeking to develop the five-fold Ephesians 4 ministries as key to effective church life.

Many times over the last 20 years God has given us the verses from Isaiah 54.2,3:

'Enlarge the place of your tent, stretch your tent
curtains wide, do not hold back; lengthen your cords,
strengthen your stakes. For you will spread out to the
right and to the left; your descendants will dispossess
the nations and settle in their desolate cities.'

This has pushed us beyond an inward, parochial or town centred vision to one that stretches across the area, the nation and overseas.

Since 2011 we have seen our relationship with other Salt and Light churches in the south east of England being strengthened.  These are South Kent Community Church based in Folkestone and Ramsgate Christian Fellowship.

Easter 2014 saw Nick Barratt set in place as the Pastor of the church.  The church is made up of people from Lydd, Dungeness, Lydd on Sea, Greatstone, Littlestone, New Romney, St. Mary's Bay, Dymchurch and places beyond Romney Marsh all seeking to follow Jesus and to be salt and light in our homes,  communities and workplaces.